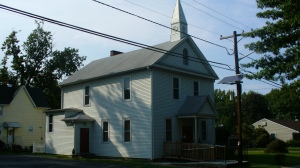 I live in Haddon Township, New Jersey, and of course one of the things I love is finding interesting tidbits of local history in my own backyard. I love going down unexplored roads or alleyways and find a small remnant of a place or a time that  has all but  been  forgotten. There is a small section of Haddon township, nothing more than a few, non-descript, suburban streets, that holds an interesting tidbit of local history.

On Rhoads Avenue, off of MacArthur Boulevard, there is the Rhoads Temple United Methodist Church, which was founded in 1893. The congregation was founded by Charles Rhoads, a local quaker, who wanted to build a church and school in a small African-American enclave in Haddon Township known as Saddlertown.

So how did Saddlertown get here? It began when Joshua Saddler escaped slavery from a Maryland plantation in the early 1800s. He found his way to South Jersey and ended up working for a Quaker farmer named Evans, who was also an abolitionist. Evans eventually bought Saddler his freedom.

Saddler prospered and bought property in Haddon Township; in the area that became known as Saddlertown. Other African-Americans started to live on Saddler’s land and soon a community developed. It is speculated that the free blacks in this community helped on the Underground Railroad.

Seeing that the children of Saddlertown had to walk all the way to Haddonfield for schooling, Rhoads felt compelled to build a school and a church here. He built a two-story house with a lower room for the community’s children and a meeting house and bible school on the upper story. 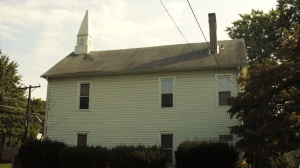 Side of Rhoads Temple

The church was deeded to the Mt. Zion Methodist Episcopal Church in nearby Lawnside. The church is still an active congregation today and is currently part of the United Methodist Church. 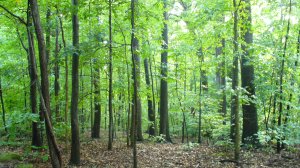 Farther down MacArthur Boulevard, behind Rhoads Temple, is nearly 26-acres of woods. The woods are an old forest fragment. Saddler left in his will that the woods would not be cleared and chopped. The forest is now a township park named Saddler’s Woods. The church and the woods are the only visible remains left today of Saddlertown.

One comment on “Saddlertown and Saddler’s Woods, Haddon Township”